According to the visual networking index (VNI) mobile forecast, mobile traffic will grow 8 fold from 2015 to 2020, a compound annual growth of 53%, that translates to 30.6 Exabytes per month by 2020 (the equivalent of downloading 7,641 million DVDs each month) vs. 3.7 Exabytes per month in 2015. This traffic growth will need significant performance improvement and more efficient CPU core utilization.

The demo runs on a standard x86 server with an Agilio CX SmartNIC and uses a 20Gb/s link between the servers to demonstrate the performance gain. The setup implements vEPC data plane components serving a gateway (S-GW) and packet data gateway (P-GW) running as virtual networking functions (VNFs) on x86 servers. The setup also implements the VNFs for the radio component eNodeB and mobile management entity (MME) for the mobile traffic emulation and session setup. The mobile traffic is generated and sent to the IP cloud implemented with the standalone servers running the TCP and UDP traffic of different packet sizes.

The data plane components of the EPC consume significant CPU resources as packet processing is not limited to the application software and IP stack processing but it also involves the forwarding traffic to the VMs and transmitting and receiving packets from the VMs using the PCIe interface.

When vEPC (vP-GW and vS-GW) is implemented with the traditional NIC, which uses the Linux kernel base implementation of the Open vSwitch (OVS) and Virtio technology for the VM to NIC communication, it consumes significant CPU processing power. Nearly 75% of the available CPU cores are consumed in interrupt processing, copying packets to/from VMs and classifying and forwarding the packets to the destination VMs in kernel OVS processing.

Implementation of S-GW and P-GW on x86 servers with an Agilio CX SmartNIC and Agilio software, gives 4-5X performance improvement in terms of throughput, number of virtual machines (VMs), latency and efficient CPU utilization. This gain is observed because the Agilio CX SmartNIC with Agilio software running on the Netronome flow processor utilizes the OVS offload and SR-IOV technologies. OVS offload implements the replication of the kernel based packet lookup and switching tables into the Agilio CX SmartNIC, so the CPU does not have to waste processing cycles for the packet classification and corresponding actions.

Agilio CX SmartNIC takes advantage of the SR-IOV implementation because of the OVS offload into the Agilio CX SmartNIC, SR-IOV enables direct communication of the VMs by assigning the PCIe virtual functions (VFs) to them. This eliminates the need to interrupt the cores when packets arrive at the adapter’s PCIe interface for receiving or transmitting by the VMs. The SR-IOV cannot be used in case of traditional NIC because SR-IOV bypasses the kernel processing and Open vSwitch for packet classification and forwarding is implemented in the kernel. 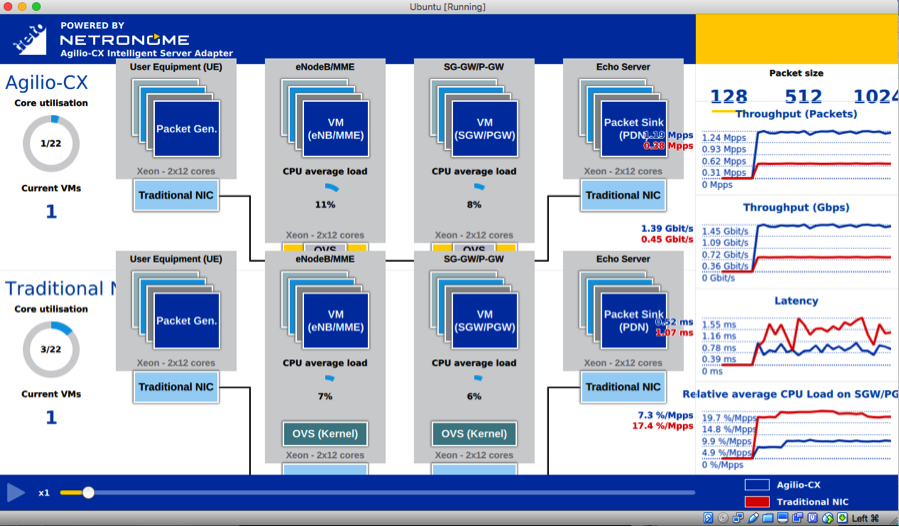 As observed, with one vEPC VNF (VM) approximately 4X performance gain (1.25 Mpps vs. 0.31Mpps) is observed in terms of performance and CPU cores. 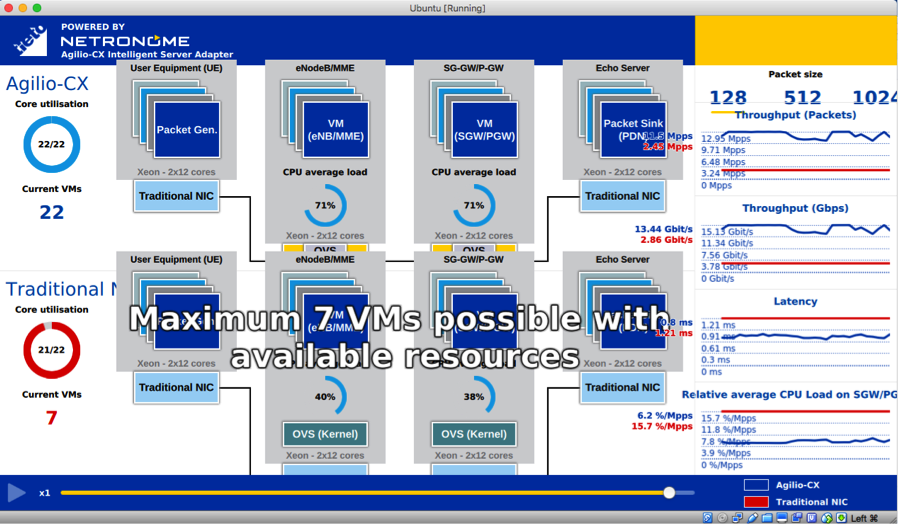 As shown in the 2nd picture, a total of 22 VMs can be implemented on the Agilio CX as compared to the traditional NIC, which only allows the implementation of 7 VMs before exhausting the CPU cores on an x86 server. Agilio CX also observes the 4X overall throughput gain (13.1Mpps vs. 3.27Mpps) per server for the 4G LTE traffic.

Though the demo setup initially measures the base performance with implementation of NFV infrastructure (NFVI), it can be extended to real NFV deployment with the integration of the NFV management and orchestration (MANO) layer implementing the VNF manager, virtual infrastructure manager (VIM) such as Open Stack and NFV orchestrator.

5G network deployments in the future are defining new architecture for cloud RAN, virtual base station and packet core network which will call for very efficient usage of the CPU cores in the data centers and hence demand for VNF acceleration in a complete NFV environment.

If you are attending MWC, please visit Netronome suite (Hall 2, Stand 2N17MR) for a demo of the vEPC solution with Agilio CX SmartNIC and Tieto application software.