I am writing this from the OpenStack Summit in Barcelona, fresh from speaking to many data center operators who are deploying OpenStack-based clouds. Virtual machines (VM) and applications that run in them form the core building blocks of today’s modern cloud data centers. Revenue from VMs are the lifeline of public cloud service providers. Enterprises that deploy private cloud infrastructure rely on VMs and their apps to deliver the needed services to their customers. Data center operators rely on the promise of deploying SDN and NFV, and realizing deployment efficiencies using COTS servers to achieve their revenue, service and other business goals. However, I heard all of them echo what James Hamilton of Amazon Web Services said a few years ago, “Data center networks are in my way,” but with a subtle difference. Instead of data center networks, some said SDN, and others said OpenStack networking or Open vSwitch (OVS) networking or Contrail vRouter networking. When it came to describing their challenges, the resounding common theme was poor server infrastructure efficiency. It sure hurts when 60% of data center infrastructure costs come from servers and related power and cooling.

So what is it about current networking solutions that is really hurting OpenStack-based server infrastructure efficiencies? Let’s look under the hood.

VMs come in many flavors based on what they run: web server applications, Hadoop big data or other database applications, networking applications, or security applications. The VMs have different profiles in terms of resource requirements: the number of virtual CPU cores (vCPUs), the amount of I/O bandwidth (packets per second), memory (megabytes), disk (gigabytes), tenancy requirements (single versus multiple), reporting of metrics related to their operation and performance behavior, and others. The vCPUs and amount of I/O bandwidth (packets per second) for each VM are relevant in this discussion. For example, a web server application typically requires a moderate number of vCPU cores and lower I/O bandwidth, while Hadoop big data and networking application VMs typically require a moderate-to-high number of vCPU cores and high I/O bandwidth. Delivering optimal I/O bandwidth to VMs of different flavors is a challenge; it requires different networking configurations and affects the heterogeneity and efficiency of server infrastructures.

The networking services for VMs in OpenStack deployments are mostly delivered using OVS or Contrail vRouter. The I/O bandwidth delivered through such datapaths to VMs is affected by the following:

The I/O Interface between the VM and Host or Hypervisor. The data can be delivered to the VM from the OVS and vRouter datapaths in one of the following ways:

When operators have to deal with different VM profiles, it is impossible to achieve an optimal, homogenous end-to-end configuration across all servers. For example, the operator could take different paths based on data path options in the host/hypervisor and the I/O interface between the VM and the host/hypervisor:

1. Figure 1 - OVS in Host + Virtio in VM: One option could be to use the kernel datapath options for OVS or vRouter and Virtio-based delivery of data to VMs across all servers. The result is a homogenous server deployment managed using OpenStack. The challenge here is poor performance to the VMs that require higher packets per second, or not having enough CPU cores left to deploy an adequate number of VMs in the server. This results in poor SLAs and server sprawl. 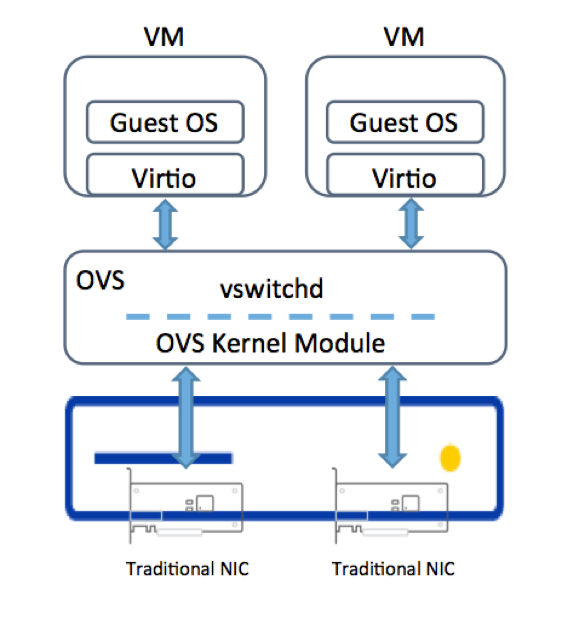 2 .Figure 2 - OVS-DPDK in Host + DPDK PMD or Virtio to VM: A second option is to use DPDK user space datapath options for OVS or vRouter and DPDK and Virtio-based delivery of data to VMs across all servers. The result is a homogenous server deployment managed with OpenStack. The challenge here is mediocre performance to the VMs that require higher packets per second, or not having enough CPU cores left to deploy an adequate number of VMs in the server. Also, to deliver adequate levels of performance, the administrator will have to pin different numbers of cores to the DPDK datapath to get the right level of performance. As a result, cores could be wasted on some servers or performance may be inadequate on others. Enabling an efficient way of configuring DPDK and the right number of cores per server can become a nightmare, taking operational costs higher. (This challenge is further explained in the next section.) 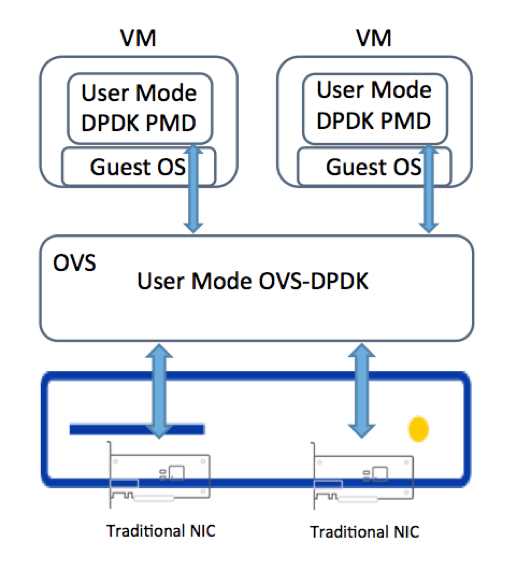 3 .Figure 3 - Traditional NIC + SR-IOV: A third option is to create a silo of servers that are configured using SR-IOV to deliver the highest performance. If the datapaths are running in kernel or user space, as discussed earlier, all SDN-based services provided by OVS or vRouter are lost. VMs on this silo of servers cannot be migrated. This makes efficient management of the servers difficult, taking operational costs higher. 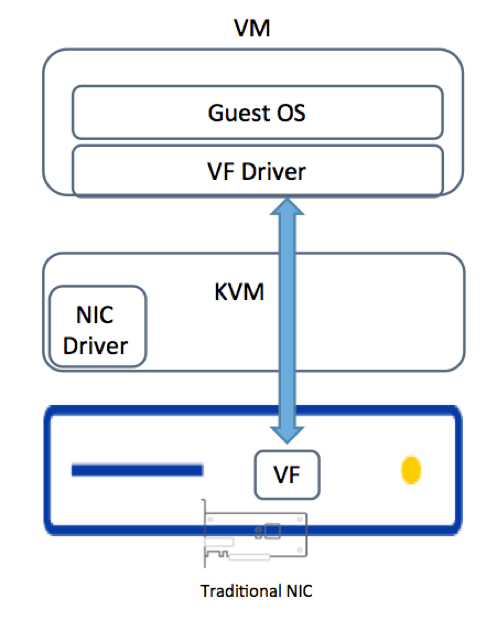 4 .Figure 4 - SmartNIC + SR-IOV: A fourth option is to create a silo of servers that are configured using SR-IOV to deliver the highest performance. The datapath runs in a SmartNIC, as discussed earlier, and all SDN-based services provided by OVS or vRouter are kept intact. VMs on this silo of servers cannot be migrated, however. This makes efficient management of the servers difficult, taking operational costs higher. 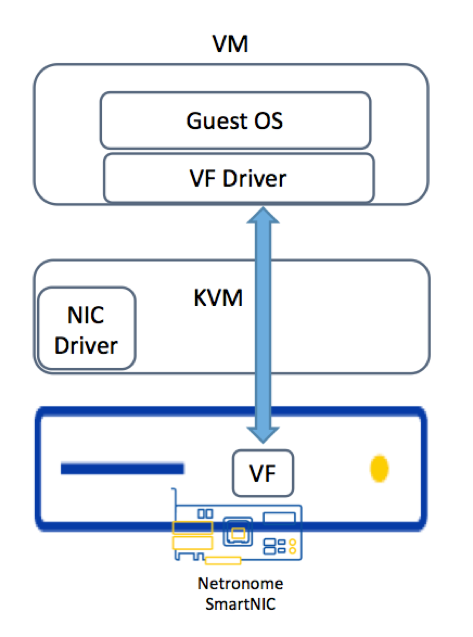 Figure 5: Servers are configured differently to service different VM profiles. VMs cannot be migrated at all or it is hard to do so

In the final, and next part of this blog, my colleague Abhijeet Prabhune will write about solutions to the above operational challenges I highlighted in this blog.


Read the Blog, "The Case for Express Virtio (XVIO) - Part 2" by Abhijeet Prabhune.