Netronome has developed a domain-specific architecture (DSA) that allows customers to build accelerators for networking and storage applications in data center and edge computing markets. This delivers efficient and high-performance heterogeneous solutions when paired with multi-core processors. Netronome’s technology can be purchased as hardened IP blocks to build custom SoC silicon devices, as SoC devices, SmartNICs or Smart Edge platforms and related software.

At the core of Netronome’s product portfolio is the flexible Network Flow Processor (NFP), based on a highly modular, scalable multi-core DSA architecture that contains an extremely high-bandwidth fabric that enables a unique and composable “LEGO block” structure. This allows for rapid evolution of new devices by Netronome or by our partners.

Using these devices Netronome designed a broad range of 10Gb/s to 100Gb/s SmartNIC and Smart Edge solutions that improve the performance, cost and power consumption of COTS servers by offloading processing-intensive functions such as virtual switching, security, load balancing and telemetry.

Due to the demise of Moore’s Law, increases in multi-core processor performance are not free anymore. The number and size of transistors affordable per dollar peaked in 2014 with the 20nm process node and has since flattened or declined.

This trend, coupled with increasing data traffic and deployment of processing-intensive workloads has driven the rapid growth of the heterogeneous processing market. Domain-specific offload coprocessors, like Netronome’s NFP, are programmable and deliver significantly greater silicon utilization and overall productivity in servers.

Importance of “Networking in the Server”

As servers evolved in the data center core and the enterprise edge, more networking functions must be implemented inside the server or edge processors. This includes routing traffic efficiently between VMs or containers, maintaining stateful security through distributed firewalls, denial of service protection, etc. 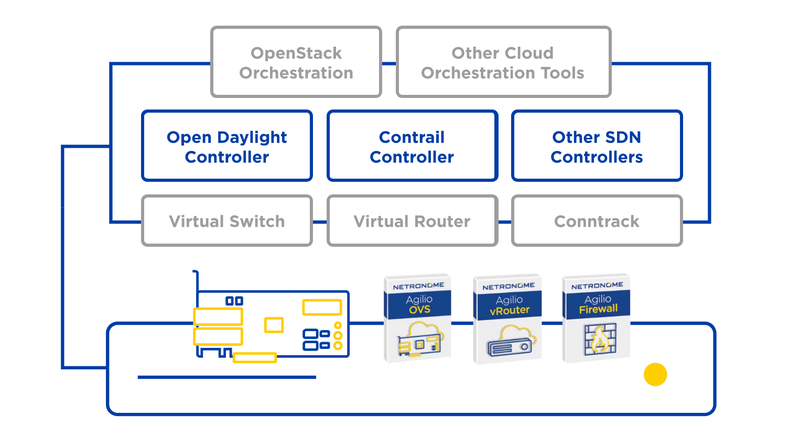 In servers built using a heterogeneous processing architecture, multiple processing elements exist. Besides the multi-core host processor, the server may contain storage directly coupled to the network coprocessor. In addition, a machine learning workload coprocessor may also be directly attached to the networking coprocessor. This optimizes data management and NUMA placement of data and removes networking overhead from the multi-core processor. This also reduces latency in the platform. 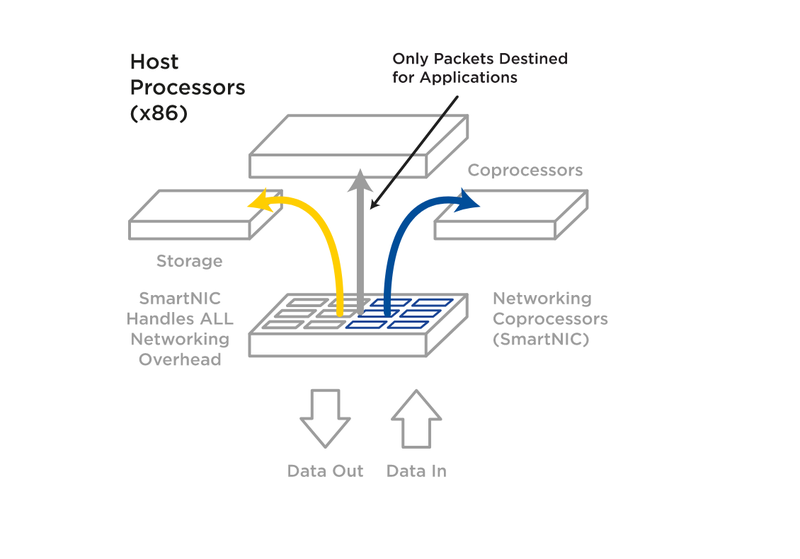 How We Address Customer Needs

Netronome SmartNICs are available in standard low-profile or OCP form factors, or custom form factors as may be needed to fit form, size and power profiles in optimized Smart Edge devices. Netronome delivers off-the-shelf firmware loads that install on the SmartNICs to serve a wide array of modern networking and security applications. They work in conjunction with standard, upstreamed and open source server networking software.

Netronome enables a flexible and highly performant programming environment for users to develop their own preferred data plane. In a “sea of workers” programming model with each worker executing in a RTC model, developers can create code in C, or C through the Linux kernel in eBPF, P4 or in assembly. Developers do not have to have underlying parallelism to use C code in eBPF/XDP or P4 environments. The domain specificity of these languages allows simpler programs to be written while enabling high performance.

Finally, the “LEGO structure” of the NFP is derived by combining individually developed Logic Blocks, each delivering functions such as I/O interface, network processing, bulk crypto processing and memory controllers. These Logic Blocks are licensable as silicon IP so a customer can build their own custom silicon, including creating their own Logic Blocks (e.g., for storage or machine learning coprocessors) and combining them with existing blocks.

Netronome products are available through partners such as OEMs, ODMs, system integrators and VAR channels. Netronome is committed to continuous innovation with a relentless customer focus. From a successful rollout to ongoing support, Netronome’s highly experienced global team helps customers move their smart and accelerated infrastructure forward with confidence.