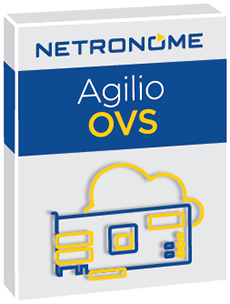 Use cases for Agilio include compute nodes for IaaS or SaaS, Network Functions Virtualization (NFV), and non-virtualized service nodes, among others. In these use cases, it is common to have a large number of network overlays and/or security policies that are enforced on the server - potentially several thousands of policies per VM. Agilio provides the ability to support very high flow and policy capacities without degradation in performance.

Netronome Agilio CX SmartNICs and Agilio software track the features of standard OVS, which are continuously evolving and include server-based networking functions such as flexible match-action forwarding, network overlay control with tunneling protocols such as VXLAN and NVGRE, and fine-grained statistics and meters. These features enable functions such as L2/L3 forwarding, network virtualization, security, load balancing and analytics. For additional information, read the Agilio OVS Software Product Brief

When OVS is offloaded and accelerated using the Agilio solution, server throughput increases significantly while freeing up CPU cycles for more VMs and applications. This means that more application-level work can now be accomplished by a fixed pool of compute servers. Alternatively, the same amount of work can now be accomplished with significantly fewer servers. This leads directly to savings on equipment costs and overall data center power and cooling, as well as the ability to better monetize existing resources. This ROI calculator shows the value of the Agilio 40GbE SmartNIC when used in a rack of servers with OVS.

Zero-Trust Security for Cloud Data Centers – How Much Does it Cost?